Mercury is among the most toxic heavy metals and has no known roles in the human body.

Amalgam fillings, also known as silver or mercury fillings have been used as a dental restorative material since the early 20th century.

Since then, concerns on human exposure to mercury has prompted The World Health Organisation (WHO) to recommend:

‘Reduce the use of dental amalgam’s worldwide.’  (1)

Many people have mercury fillings and are left with the question of whether to remove them.

The answer isn’t straight forward. Most amalgam fillings have a finite life span, and you do need to be aware of options for safe mercury removal.

Should you replace amalgam fillings?

A dental examination can reveal whether your amalgam fillings should be replaced. Removing amalgam filling can have side effects, but with a Safe-Amalgam Protocol you can ensure your teeth and body are free from the dangers of mercury poisoning.

What is Dental Amalgam?

As a material, it is relatively cheap to produce and easy to use due to its strength, which is the main reason it has been used in dental restorations since early in the 19th century.

While more recently there has been a movement away from using amalgam in dentistry, silver fillings are still being placed today in Australia.

Is Amalgam Bad for My Health?

In Norway, dentists have been banned from using mercury fillings. Other European countries such as Denmark and Sweden are actively ‘phasing down’ amalgam.

There have been concerns raised about the possible side effects resulting from the exposure to amalgam restorations due to the risk of mercury being released into the body. Mercury is widely understood to be extremely toxic to the human body. Mercury can be absorbed through soft tissue (such as in the mouth), or inhaled as mercury vapour.

Amalgam has been banned both for its negative effect on the environment and risk of mercury poisoning.

Environmental exposure to mercury happens to most people. The question is whether you are at risk of overexposure.

A 2016 report from the Norwegian Institute of Public Health found:

“There were somewhat higher mercury levels in urine in the amalgam group, both after five years and seven years.”

However, they could not find differences in systemic health.

So, are you at risk?

Mercury poisoning is the most severe complication of mercury exposure. It is considered a rare condition that can lead to a range of symptoms. It can happen as mercury slowly builds up in your body over a long period of time.

Symptoms can also come on suddenly if you’ve recently been exposed to high amounts of mercury. To prevent mercury poisoning you may be able to spot the signs and symptoms early.

Possible symptoms of mercury poisoning include:

These symptoms are associated with end stage mercury poisoning. It’s a rare condition, and there may be other side effects of mercury toxicity.

Young children are more sensitive to mercury than adults. Foetal exposure to methyl mercury can occur from mother’s consumption of contaminated fish and shellfish or leaking amalgam fillings.

Mercury is known to adversely affect the baby’s growing brain and nervous system. Therefore, cognitive thinking, memory, attention, language, and fine motor and visual spatial skills may be affected in children who were exposed to methyl mercury while in the womb or during infancy.

Mercury Poisoning and the Brain

One of the first signs of mercury poisoning may be mental health and neural diseases. (3)

The earliest symptoms may be:

The endocrine system is a group of organs that release hormones in the body.

The thyroid is an endocrine organ that may be affected by mercury.

Hypothyroidism is a condition where low thyroid hormones can disrupt such things as heart rate, body temperature and all aspects of metabolism. Hypothyroidism is most prevalent in older women.

The thyroid uses iodine to produce its hormones T4 and T3. The problem is that mercury in the body could mimic iodine.

If your thyroid is storing mercury in place of iodine, it won’t have enough iodine to produce adequate levels of T4 and T3 hormones, which can cause you to develop hypothyroidism. (6)

Having your doctor test for mercury levels is the only way to know how much mercury is in your body.

How do you test for mercury in the body?

Here are several tests your doctor may use:

Mercury may be released from amalgam fillings over time.

Some studies show the release of mercury from dental amalgam fillings in individuals who used mobile phone. In the presence of heat or magnetic fields, amalgam fillings could release mercury.

“The difference between urinary mercury in the exposed and control group, 72 hrs after MRI (96 h after restoration),was significant (p=0.046). These findings provide further support for the noxious effect of MRI (exposure to strong magnetic field) and release of mercury from dental amalgam fillings.” (8)

Mercury has been shown to be released from dental exhaust systems, showing safe removal is important to prevent further exposure to mercury. (9)

At Luminous Dentistry we provide the utmost safety to patients and staff. Procedures include using a rubber dam, providing an oxygen supply to both the patient and staff, and using a high volume suction device in the patients’ mouth, all to prevent any excess mercury vapour being re-ingested.

The silver fillings are usually removed in quadrants, which means we remove all the amalgams in a quarter of the mouth at a time as an added safety precaution.

It’s important to remember that all dental treatments come with potential, and that replacing amalgam fillings may result in tooth sensitivity, nerve death in the tooth, or tooth loss.

A balanced assessment is required to weight the risks vs benefits.

Initial: Examination and assessment if amalgam fillings should and can be removed safely. 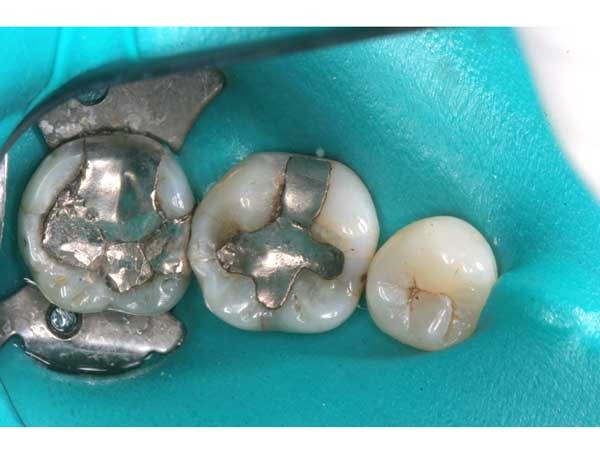 Before the procedure: Examination and assessment if amalgam fillings should and can viably be replaced.

Additional air filtering system that’s placed as close to the patient’s mouth as is practical. The more popular ones resemble an elephant’s trunk and have openings about 4 inches in diameter. This can be helpful, but I agree with those mercury safe dentists who believe that the patient can be adequately protected without such a system. More and more mercury safe dentists are using this type of purification system and while it’s a nice addition to the removal protocol, it is more important for the dentist and assistant than the patient.

There are a number of supplements that can assist safe amalgam removal and exposure of the body to mercury:

Activated charcoal is created with a heating process making it extremely adsorbent. It to bind to molecules, ions, or atoms and is used in hospitals substances

There’s some evidence that activated charcoal taken 10-15 minutes before amalgam removal can bind smaller particles of swallowed mercury, allowing them to be harmlessly passed out of the digestive system via the feces.

There are over 30 different species, but two types — Chlorella vulgaris and Chlorella pyrenoidosa — are most commonly used in research.

Chlorella has also been found to enhance the immune response in both animal and human studies, although the evidence so far is limited.

A powerful antioxidant, pre and post supplementation can help improve the immune resilience to mercury.

Besides safely removing amalgam fillings, and safely removing existing ones you can limit or eliminate seafood consumption as well as avoiding certain vaccinations containing mercury.

Mercury can also be present in food and beverages.

To avoid the consumption of mercury exposed products, read the labels to ensure that no ingredient has the letters MER in the name.

Return to ServicesBook an Appointment